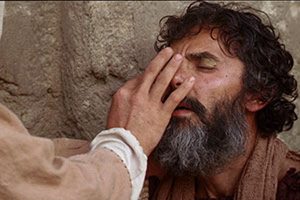 The Ransomed Shall Return

35 The wilderness and the dry land shall be glad;
the desert shall rejoice and blossom like the crocus;
2 it shall blossom abundantly
and rejoice with joy and singing.
The glory of Lebanon shall be given to it,
the majesty of Carmel and Sharon.
They shall see the glory of the Lord,
the majesty of our God.

3 Strengthen the weak hands,
and make firm the feeble knees.
4 Say to those who have an anxious heart,
“Be strong; fear not!
Behold, your God
will come with vengeance,
with the recompense of God.
He will come and save you.”

5 Then the eyes of the blind shall be opened,
and the ears of the deaf unstopped;
6 then shall the lame man leap like a deer,
and the tongue of the mute sing for joy.
For waters break forth in the wilderness,
and streams in the desert;
7 the burning sand shall become a pool,
and the thirsty ground springs of water;
in the haunt of jackals, where they lie down,
the grass shall become reeds and rushes.

8 And a highway shall be there,
and it shall be called the Way of Holiness;
the unclean shall not pass over it.
It shall belong to those who walk on the way;
even if they are fools, they shall not go astray.
9 No lion shall be there,
nor shall any ravenous beast come up on it;
they shall not be found there,
but the redeemed shall walk there.
10 And the ransomed of the Lord shall return
and come to Zion with singing;
everlasting joy shall be upon their heads;
they shall obtain gladness and joy,
and sorrow and sighing shall flee away.

9 As he passed by, he saw a man blind from birth. 2 And his disciples asked him, “Rabbi, who sinned, this man or his parents, that he was born blind?” 3 Jesus answered, “It was not that this man sinned, or his parents, but that the works of God might be displayed in him. 4 We must work the works of him who sent me while it is day; night is coming, when no one can work. 5 As long as I am in the world, I am the light of the world.” 6 Having said these things, he spit on the ground and made mud with the saliva. Then he anointed the man’s eyes with the mud7 and said to him, “Go, wash in the pool of Siloam” (which means Sent). So he went and washed and came back seeing.

13 They brought to the Pharisees the man who had formerly been blind.14 Now it was a Sabbath day when Jesus made the mud and opened his eyes. 15 So the Pharisees again asked him how he had received his sight. And he said to them, “He put mud on my eyes, and I washed, and I see.” 16 Some of the Pharisees said, “This man is not from God, for he does not keep the Sabbath.” But others said, “How can a man who is a sinner do such signs?” And there was a division among them. 17 So they said again to the blind man, “What do you say about him, since he has opened your eyes?” He said, “He is a prophet.”

18 The Jews did not believe that he had been blind and had received his sight, until they called the parents of the man who had received his sight19 and asked them, “Is this your son, who you say was born blind? How then does he now see?” 20 His parents answered, “We know that this is our son and that he was born blind. 21 But how he now sees we do not know, nor do we know who opened his eyes. Ask him; he is of age. He will speak for himself.” 22 (His parents said these things because they feared the Jews, for the Jews had already agreed that if anyone should confess Jesus to be Christ, he was to be put out of the synagogue.)23 Therefore his parents said, “He is of age; ask him.”

24 So for the second time they called the man who had been blind and said to him, “Give glory to God. We know that this man is a sinner.”25 He answered, “Whether he is a sinner I do not know. One thing I do know, that though I was blind, now I see.” 26 They said to him, “What did he do to you? How did he open your eyes?” 27 He answered them, “I have told you already, and you would not listen. Why do you want to hear it again? Do you also want to become his disciples?” 28 And they reviled him, saying, “You are his disciple, but we are disciples of Moses.29 We know that God has spoken to Moses, but as for this man, we do not know where he comes from.” 30 The man answered, “Why, this is an amazing thing! You do not know where he comes from, and yet he opened my eyes. 31 We know that God does not listen to sinners, but if anyone is a worshiper of God and does his will, God listens to him.32 Never since the world began has it been heard that anyone opened the eyes of a man born blind. 33 If this man were not from God, he could do nothing.” 34 They answered him, “You were born in utter sin, and would you teach us?” And they cast him out.

35 Jesus heard that they had cast him out, and having found him he said, “Do you believe in the Son of Man?” 36 He answered, “And who is he, sir, that I may believe in him?” 37 Jesus said to him, “You have seen him, and it is he who is speaking to you.” 38 He said, “Lord, I believe,” and he worshiped him. 39 Jesus said, “For judgment I came into this world, that those who do not see may see, and those who see may become blind.”40 Some of the Pharisees near him heard these things, and said to him, “Are we also blind?” 41 Jesus said to them, “If you were blind, you would have no guilt; but now that you say, ‘We see,’ your guilt remains.

9:00 – 9:45 AM – in the Parish Hall Upper Level.  Join our adult Coffee & Discussion group.  The Bible Project – “The Bible is one unified story that leads to Jesus, but we don’t always treat it that way.  At The Bible Project, we make animated videos that explore the books and themes of the Bible.”  How To Read The Bible – “This ongoing series explores the origins, content, and purpose of the Bible.  Here you’ll be introduced to some of the basic skills necessary for reading the Bible effectively.”  Feel free to join the group at any time.