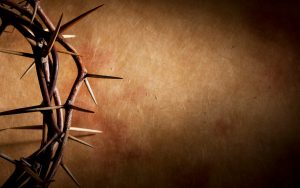 Jesus Delivered to Be Crucified

19 Then Pilate took Jesus and flogged him. 2 And the soldiers twisted together a crown of thorns and put it on his head and arrayed him in a purple robe. 3 They came up to him, saying, “Hail, King of the Jews!” and struck him with their hands. 4 Pilate went out again and said to them, “See, I am bringing him out to you that you may know that I find no guilt in him.” 5 So Jesus came out, wearing the crown of thorns and the purple robe. Pilate said to them, “Behold the man!” 6 When the chief priests and the officers saw him, they cried out, “Crucify him, crucify him!” Pilate said to them, “Take him yourselves and crucify him, for I find no guilt in him.” 7 The Jews[a] answered him, “We have a law, and according to that law he ought to die because he has made himself the Son of God.” 8 When Pilate heard this statement, he was even more afraid. 9 He entered his headquarters again and said to Jesus, “Where are you from?” But Jesus gave him no answer.