“The Power of Serving” 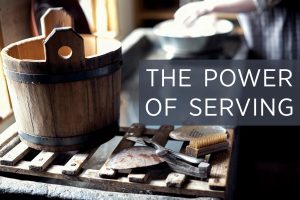 6 When they came, he looked on Eliab and thought, “Surely the Lord‘s anointed is before him.” 7 But the Lord said to Samuel, “Do not look on his appearance or on the height of his stature, because I have rejected him. For the Lord sees not as man sees: man looks on the outward appearance, but the Lord looks on the heart.” 8 Then Jesse called Abinadab and made him pass before Samuel. And he said, “Neither has the Lord chosen this one.” 9 Then Jesse made Shammah pass by. And he said, “Neither has the Lord chosen this one.” 10 And Jesse made seven of his sons pass before Samuel. And Samuel said to Jesse, “The Lord has not chosen these.” 11 Then Samuel said to Jesse, “Are all your sons here?” And he said, “There remains yet the youngest, but behold, he is keeping the sheep.” And Samuel said to Jesse, “Send and get him, for we will not sit down till he comes here.” 12 And he sent and brought him in. Now he was ruddy and had beautiful eyes and was handsome. And the Lord said, “Arise, anoint him, for this is he.”

48 When the Philistine arose and came and drew near to meet David, David ran quickly toward the battle line to meet the Philistine. 49 And David put his hand in his bag and took out a stone and slung it and struck the Philistine on his forehead. The stone sank into his forehead, and he fell on his face to the ground.

Sunday Morning Worship:
10:00 AM – in the Sanctuary.  Join us today for Pastor Joe Vasarhelyi’s sermon “The Power of Serving.”