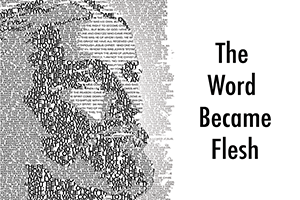 38 “Blessed is the King who comes in the name of the Lord! Peace in heaven and glory in the highest!” 39 And some of the Pharisees in the crowd said to him, “Teacher, rebuke your disciples.” 40 He answered, “I tell you, if these were silent, the very stones would cry out.”

41 And when he drew near and saw the city, he wept over it, 42 saying, “Would that you, even you, had known on this day the things that make for peace! But now they are hidden from your eyes.

9 The true light, which gives light to everyone, was coming into the world. 10 He was in the world, and the world was made through him, yet the world did not know him. 11 He came to his own, and his own people did not receive him. 12 But to all who did receive him, who believed in his name, he gave the right to become children of God, 13 who were born, not of blood nor of the will of the flesh nor of the will of man, but of God.

14 And the Word became flesh and dwelt among us, and we have seen his glory, glory as of the only Son from the Father, full of grace and truth.

Sunday Morning Worship:
10:00 AM – in the Sanctuary.  Join us today for Pastor Joe Vasarhelyi’s sermon “The Word.”