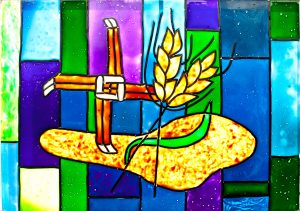 5 Yet you have made him a little lower than the heavenly beings
and crowned him with glory and honor.
6 You have given him dominion over the works of your hands;
you have put all things under his feet,
7 all sheep and oxen,
and also the beasts of the field,
8 the birds of the heavens, and the fish of the sea,
whatever passes along the paths of the seas.

9 O Lord, our Lord,
how majestic is your name in all the earth!

The Parable of the Talents